Once in a while clients ask a question of our work that at first I think so basic but then later consider almost inspired. Just such a moment occurred last week.

I was presenting the results of a client commission in mainland Europe when a senior manager at that client asked if we could clarify which influencers influenced internally i.e.. within their own organisations, and which influenced primarily outside their organization.

In the back of my head several responses came to mind. From ‘does that really matter?’ to  “how could we measure that?” to “would knowing the answer affect your interest in them?”. And even “is there an answer to that?”

Thanks Susanne, whether you meant it to be or not, it was a great question. And I’m still thinking of a worthy answer. 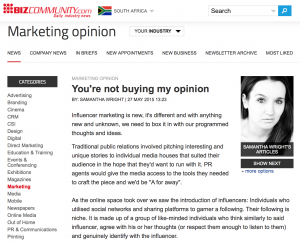 A worthwhile read from Samantha Wright in South Africa on one way in which influencers differ from traditional PR targets. Thanks to BizCommunity for this. 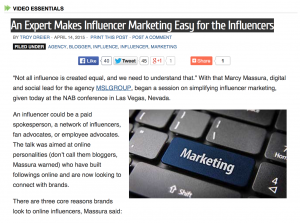 In the B2B sector every in-house Marketing VP, Audience Manager or C-level immediately understands that their organisation’s customers & prospects are primarily influenced offline and through online search. Those that meet their customers know that these people aren’t glued to Hootsuite all day long, picking up whatever’s being posted on Twitter, Facebook et al. They laugh at even the thought of it.

So it still bemuses me there are other self-appointed ‘influencer platforms’ that effortlessly transpose the word ‘influencers’ for ‘social influencers’ so as to promote their own Twitter- or blog-trawler software. I used to wonder how these companies exist – because if they met any of the corporate buyers I meet they’d be laughed out of the office. In perhaps every B2B sector that I know of, ‘social influencers’ are in the very extreme minority – less than five per cent.

Then I came to understand how these platform providers exist. They sell to marketing agencies. And marketing agencies just don’t care about real market influencers – they care about numbers of people who they can outreach to. The game is to continuously ‘top up’ those outreach numbers. Even if those people have only the most tenuous connection to their client’s sales prospects.

So why don’t the in-house managers spot this and call out their marketing agencies? Because too many in-house managers themselves never meet real sales prospects. And so also have no understanding of who they’re really influenced by. This cycle has to stop. 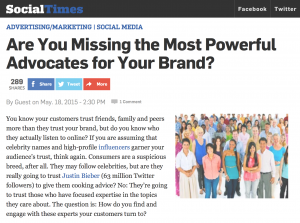 When a company makes the following promise to its clients … I know they’re measuring the wrong thing. If only buyers were so predictable.

A firm describing itself as “a leading shopper social media company, announced today that all clients will receive guarantees on how social influencer marketing campaigns will perform before campaign dollars are invested. Through its new Guaranteed Engagement offering, (company name) brings a unique level of confidence to the online marketing world.”