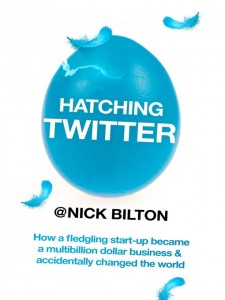 Just finished reading the 2013 book ‘Hatching Twitter’ by Nick Bilton of the The New York Times. It reads like a novel but is actually an account of the first five years of Twitter – from its earliest days inside the podcasting startup Odeo to the 2011 arrival of Dick Costolo as CEO.

I thought I’d followed the inside story of Twitter closely enough at the time it was happening, but I had no idea what really went on inside the company. I assumed the founders had amicably left to pursue other startups. I thought there were three founders not four. And I thought they were largely left alone to develop Twitter as they wanted. I was wrong on all counts. Assume that every time we read of the top roles being voluntarily reshuffled there was treachery and a bloody coup behind each move. Fascinating to read what really went on. Highly recommended.